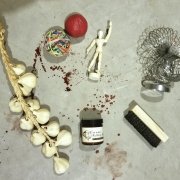 These items were found during a #ContrabandSweep near the #Sandbox during #OpInhumanity.
Safely taken off the fairgrounds and disposed of.