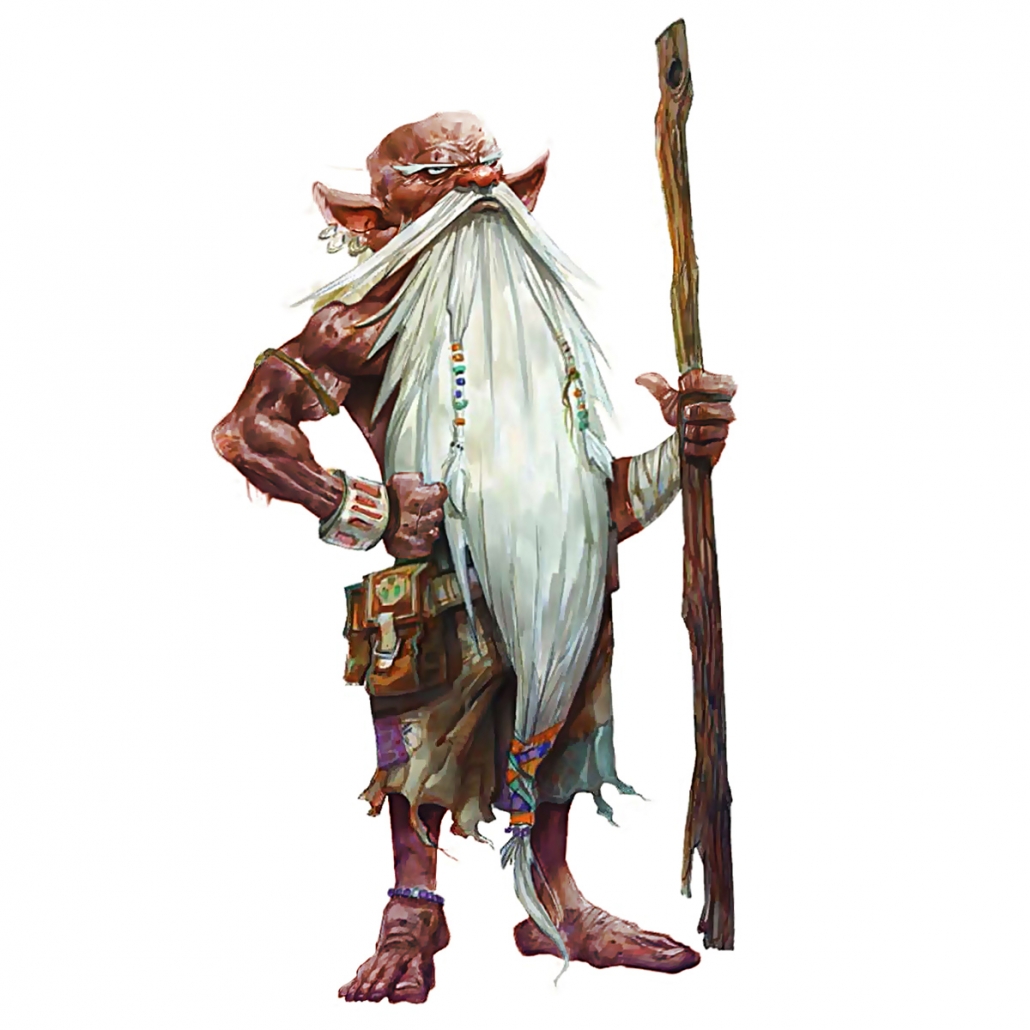 Many decades ago, lost in the fog-faded mists of time, a young hobgoblin abandoned his clan. Dissatisfied with a warlike life of plunder and raiding, this outcast wandered the uncaring world alone, pondering his purpose. With no personal ties and no means of finding a society willing to accept him, he recused himself to the life of a hermit in the cavern Griswold.

With a cherrywood bough as his only weapon, he learned to hunt and forage for survival. As the years wore on, the lonesome creature grew to revel in his solitude, fiercely intimidating any unlucky wanderer who stumbled across his humble home.

Local legends grew about the Beast of Griswold Cavern, and a fateful party of heroes was hired to slay the monster once and for all. It was here – in the maw of darkness – that the lives of band of valiant warriors would change forever.

On a hunch, the Dwarven cleric Hilde Copperpot, focused her energy on detecting the presence of evil in the cave. Shockingly, she found none. With this confusing knowledge in mind, they ventured deeper into the cave.

Huddled in front of a small fire, they spied what was surely the monster they were sent to kill. It stirred as they entered, and they readied their weapons.

“Leave this place!” snarled the beast.

Cautiously, the cleric responded, “We have been called upon to slay a ferocious monster inhabiting this cave, but I sense no evil here. Perhaps we can come to some understanding? The people of this land wish to be rid of you, but I am loath to slay an innocent creature.”

The hobgoblin was confused by the earnestness of the short woman who addressed him. He couldn’t even remember the last time anyone had actually spoken to him. In that moment, he realized he harboured a great hunger for contact, so he humoured the party.

Over what became a rather lengthy and surprisingly friendly conversation, and an unexpectedly tasty meal served by their unlikely host, the heroes and the beast came to trust one another. They settled on calling him Griz, after the cavern he spent so many years inhabiting.

In the morning, it was settled. Griz would join their party as a monk.
They set off, and as they left the woods, Griswold the Hobgoblin shared with an interested Dwarven cleric many of the thoughts he had pondered alone all these years. For the first time in his life, the outcast goblinoid was beginning to feel a sense of companionship.

Years went by, and the party’s strange travelling companion slowly transformed into a beloved friend. Griz’s heart bloomed in the company of these jolly heroes, and his alignment shifted toward Good.

With the cleric who had called out to him, he eventually found love. They were wed on a warm spring afternoon, in a shady woodland. The perfume of white nectar flowers wafted through the air as their comrades toasted their union. Griswold had never been happier.

He had just a few precious months to enjoy his new marriage. In the autumn of the same year, an unfathomable tragedy would befall the group.

Summoned by frenzied peasants, the party rushed to a burning village beset by a vile warlock. As the party valiantly charged into the inferno to take on the evil mage, Griz stayed back to practice his medicine on the fallen peasants.

In the belly of the wicked flames, the heroic party faced off against the wicked sorcerer. Their battle was epic, but in the end, in vain. The group had underestimated the power of their foe and one after another they fell.

Roused by the screams of his beloved, Griz dropped his ward and rushed in after his friends. Only too late, he caught a glimpse of black robes flitting from the scene but was distracted by the devastation in front of him.

His party, the only friends he ever had, and his blushing bride, the only person to ever truly love him, lay as charred corpses at his feet. His medicine could do nothing to revive Hilde or his companions. Dropping to his knees, he howled in agony until his voice broke. His eyes welled over in the smoking ruins until there were no more tears to shed. He held the blackened body of his wife and rocked, able to do nothing more for what felt like an eternity, while a spark began to ignite in his gut.

As the tears dried and his quivering faded, the ember of hatred ignited inside him into a bonfire of revenge.

He buried his friends on a grassy hill that day, holding a silent ceremony to all that they were and all that he had lost. By nightfall, he was off to hunt down the man who had taken everything from him.

The hobgoblin, though never wavering in his resolve, wasn’t nearly as fast nor as powerful as his sworn foe. The sorcerer was quick and stealthy and never stayed in the same place for long. In his dreams, Griz met again each night with Hilde, and each morning his hunger for revenge was rekindled. He was going to make the wicked man suffer every ounce of agony that he’d inflicted on Griz and his friends, and all the other people who died in his wake. It took nearly a decade to find the perfect moment to strike…

And then the world ended.

In the chaos of the unravelling, the almighty warlock was struck down in a rather underwhelming manner. Nearly comical actually, a falling stone brick crushed his skull in an instant.

There Griz stood, in the heart of devastation he stared down at the pathetic corpse of the warlock who had taken everything from him. Now, even his revenge was ripped from his grasp. He had nothing. Less than nothing.

His wrinkled face showed no expression; just a single tear glimmered in the corner of his eye. The ageing hobgoblin slowly turned and walked away. Leaning on his trusty cherrywood bough, he hobbled out of the ruin and out of the village in chaos. He walked into the blistering winter cold, away from civilization, and carried on.

His mind as numb as his fingers, he walked…

With a weak and trembling heartbeat, he walked…

With no destination in mind, he walked…

To be continued in…

The CSS-Only Webpage
Scroll to top