Dar’jirr, Clover in the Shade 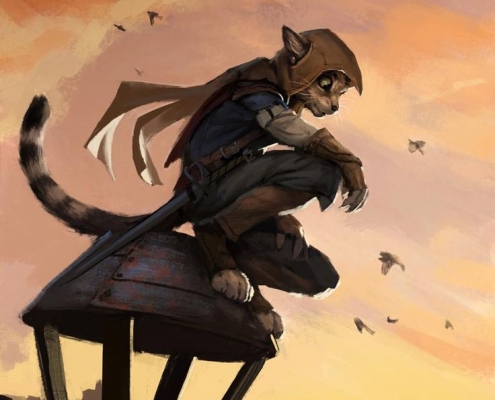 In the tradition of his ancestors, this one is called ‘Clover in the Shade‘, but in this land he is called Dar’jirr.

The clans of his people once walked a forgotten world, their swift paws met always with warm sands.  Denmother told stories of endless golden horizons, temples of gold and shimmering stone home to thousands of Tabaxi kinsmen. This one believed denmother’s tales, but the people of this land think not.

Dar’jirr is no longer a cub, and he no longer dreams of walking the mythical sands of his forefathers, instead concerned with more practical things. More… shiny things.

This one remembers little of the years since denmother passed on. He has spent his years honing his skills in the arts of trickery and showmanship, and knows well how to part a fool from their coin. Yet, Tabaxi never seems to have enough gold, he always drinks it away or carelessly spends it on luxuries to share with the prettiest people he comes across.

The people of this land came to know Dar’jirr for his tricks, and soon this one struggles to come into gold like he once could. They lock their tumblers tight and fasten their chimneys at night, and no more did they watch in wonder at his shows of great agility nor gamble with him at the table of cards. This one became destitute… until he discovered new cards with which to play.

3. Gift from the Ancients

In an ancient cavern, long thought bottomless and cursed, Tabaxi adventures in search of treasures. As this one scaled the cold stone, he longed for the warmth denmother had filled his imagination with in years long past, and as he longed, he lost focus. One misplaced claw and Dar’jirr was falling through the darkness. He said one last goodbye to the world that never truly trusted him, before his fall was broken by a pile of strange things…

Lighting his torch, this one saw mounds of ancient bodies, corpses dried and swathed in fine garments and blankets. The air, stale and thick with must hung heavy upon him. Tabaxi gathered trinkets and jewels with haste, not wishing to spend long in this evil tomb, before finding a runed leather box in a chest of engraved bones and strange stones. The box was filled with cards of an ancient design, unfamiliar to this one. He spirited this too away and finally made his escape.

Climbing for hours through the darkness, Dar’jirr collapsed in a huff in the setting sun at the precipice of the cavern. His coffers filled with shining treasures of an origin this one cared little to understand, Tabaxi made his way back to the village.

The cards he discovered were no mere gameset, this one quickly realized the magical potential of this illusionists deck and in no time he was once more turning heads with his impressive displays of sorcerous trickery. Soon, this one drew the attention of more than just gullible townsfolk.

Quickly initiated by a growing guild of thieves, Dar’jirr has been sent on a quest with a strange kinswoman to collect an artifact and cement his partnership with the guild. This one has been promised more gold and brandywine than he has ever dreamed of if he can please his new associates…